Pantami who was represented by the Director-General, National Information Technology Development Agency (NITDA), Kashifu Abdullahi, made the call at the 5th edition of the annual event, `Nerds Unite 2020’ organised by Mainone.He noted that ICT had taken over from oil.

The News Agency of Nigeria (NAN) reports that this year’s Nerds Unite 2020, witnessed the launch of local content cloud `Azure Stack’ in partnership with Microsoft and Hewlett Packard Enterprise (HPE).

The Cloud’s launch was announced by MDXI data centre, a subsidiary of MainOne.The minister said that in a digital economy, data was the oil, saying that ICT had taken over oil and gas with ICT being the third largest contributor to the nation’s Gross Domestic Product (GDP).

According to him, the five biggest companies in the world provide cloud services which are, Apple, Google, Amazon, Microsoft and Facebook.”MainOne has taken the big step of involving in cloud services and that is why we are partnering with them.

”We want to have more of MainOne in Nigeria so that cloud service will be made available and our data hosted locally.”More than 90 per cent of government data is hosted locally and we are hoping to achieve 100 percent,” he said.

The Chief Executive Officer (CEO) MainOne, Ms Funke Opeke, in her opening speech, said the firm would be celebrating 10 years of laying cables and offering digital services in West Africa. 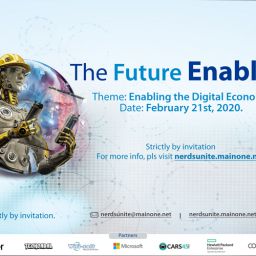