Mainone has forged ahead gallantly, achieving many milestones and gaining recognition all the way. Mainone is indeed just ready to launch. “The cable is in place, we are doing final testing and we will be in service next month.” These words were spoken on a rainy Friday afternoon on 18, June 2010 in Lagos. Ms. Funke Opeke, CEO of Mainone Cable Company Limited was the speaker and she was being interviewed via satellite by CNBC’S Lerato Mbele who was all the way in South Africa.

Exactly 10 years later, a lot has changed. Ms. Mbele has long left CNBC for the BBC. Mainone formally launched operations in July 2010 as promised. And over the next 10 years would grow to become a dynamic and extensive network with footprints across West Africa. Indeed, the company’s operations now span ten countries in the sub-region, including Nigeria and Ghana.

Mainone currently provides services to MTN, Airtel, Etisalat and several ISPS in Nigeria. It does the same in Ghana, where it serves all the large operators. History will reckon Mainone as the company that started the data revolution in West Africa.

But when Ms. Opeke first conceived the idea of building a company that would meet the connectivity needs of not only Nigeria but other countries on the West African coast, not many potential financiers saw the idea as viable.

Terrestrial fibre: Mother of all bottlenecks in Africa — Experts 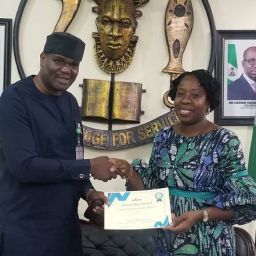